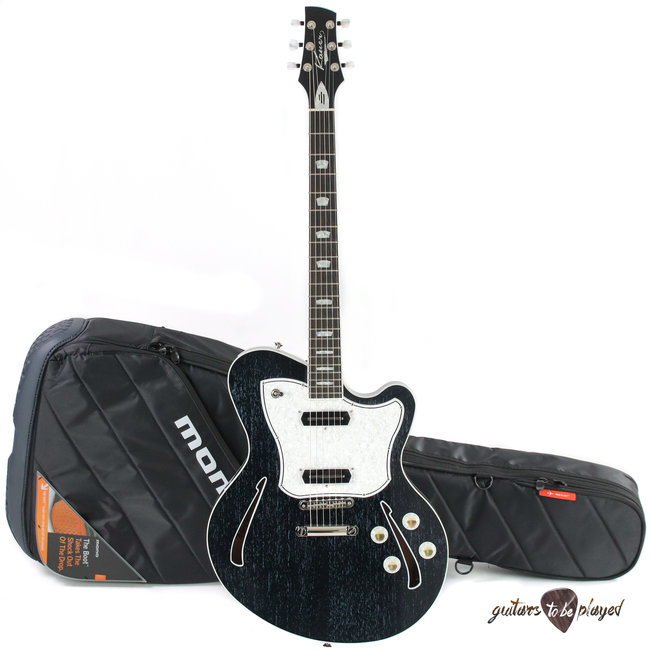 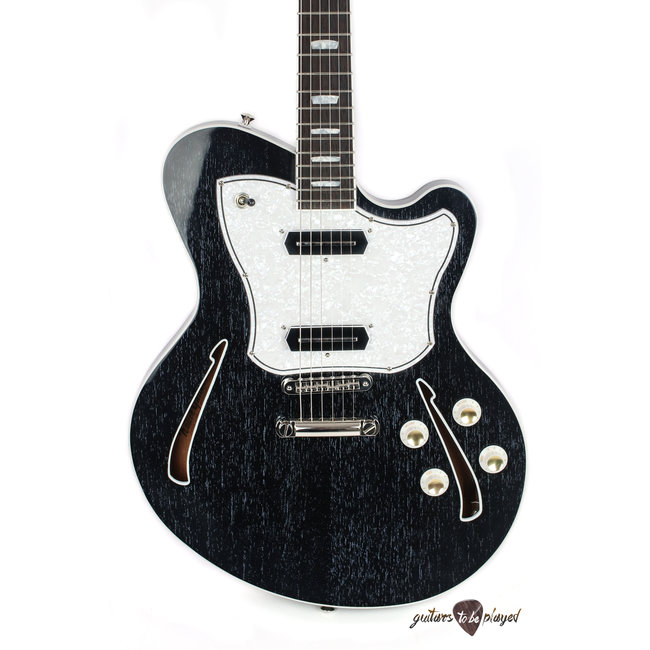 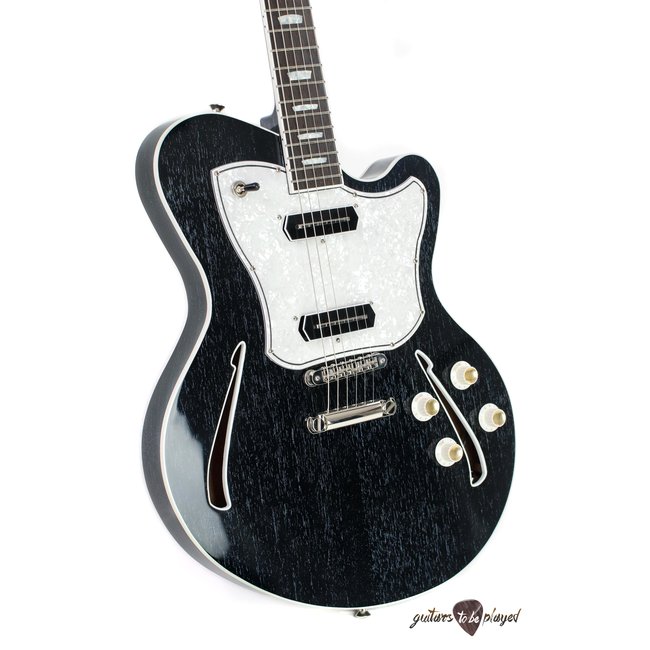 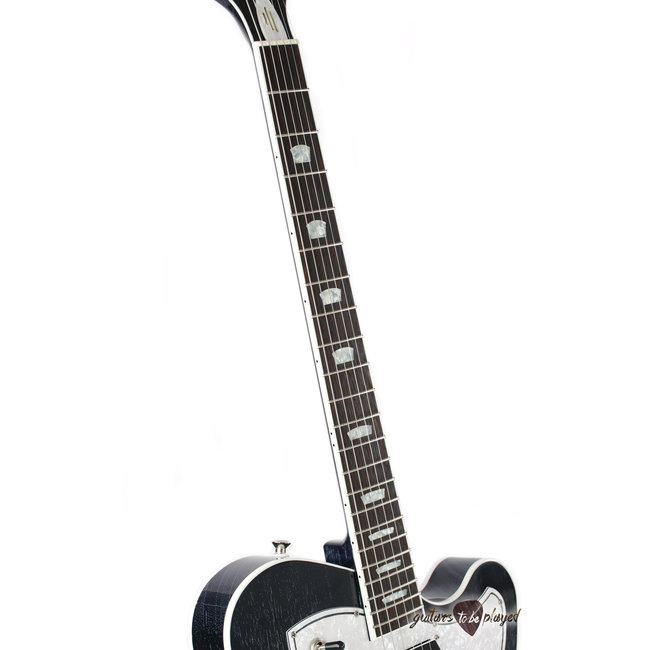 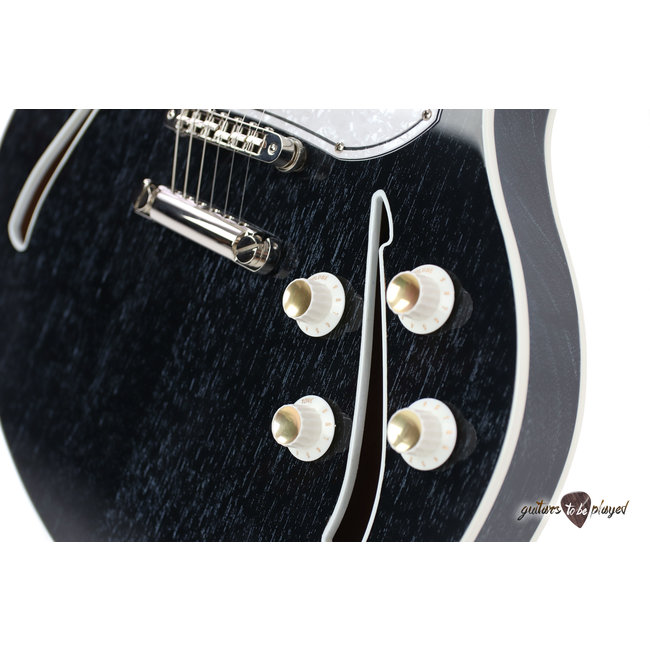 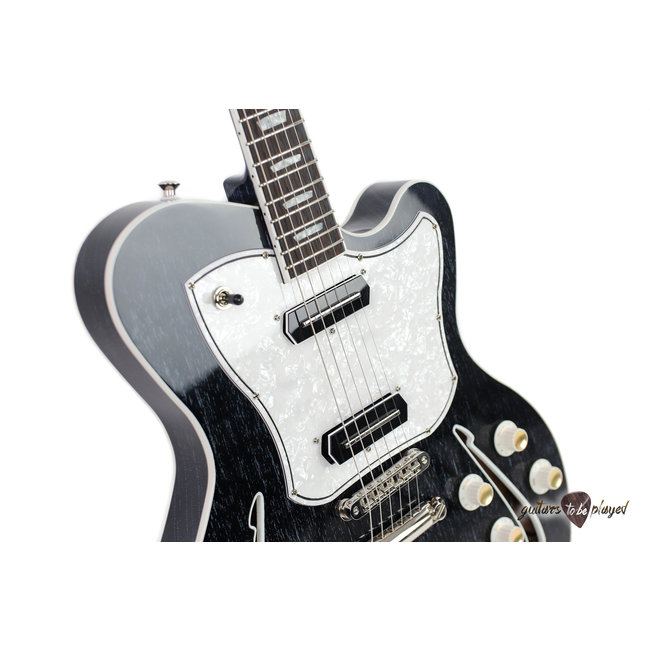 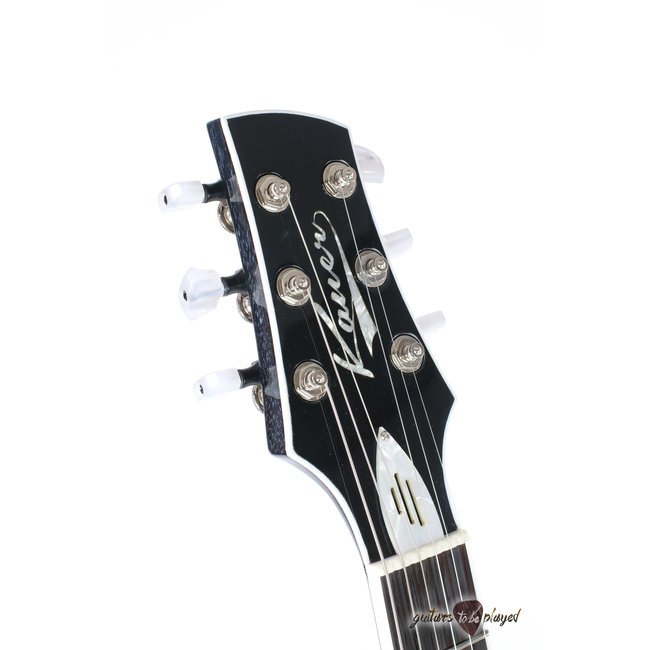 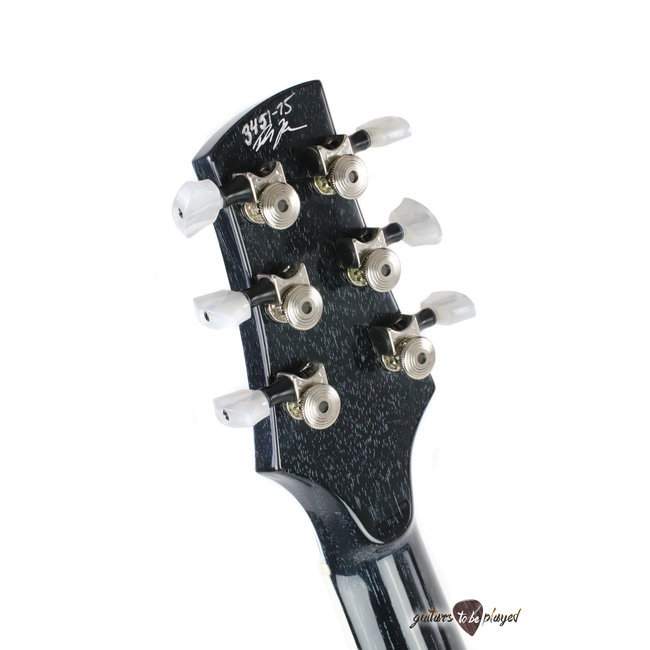 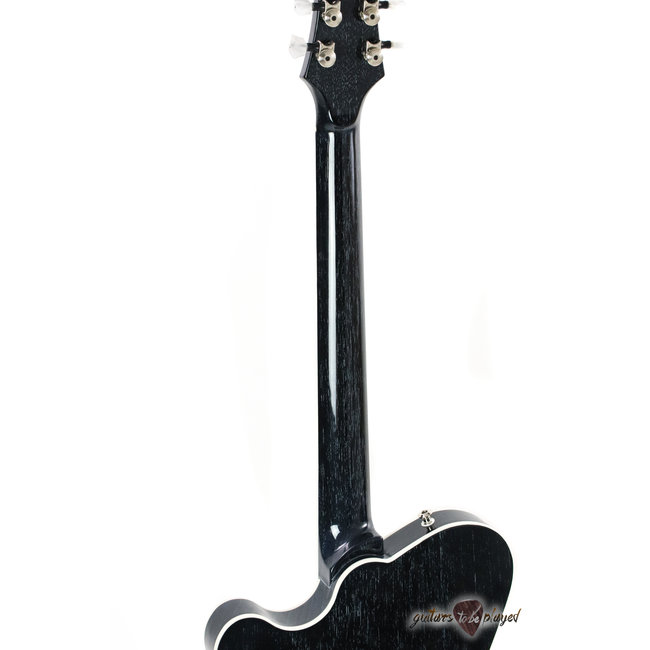 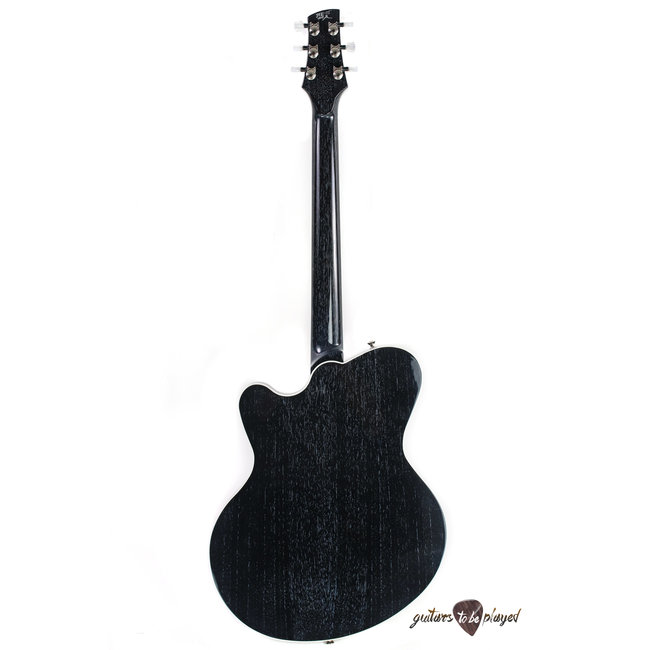 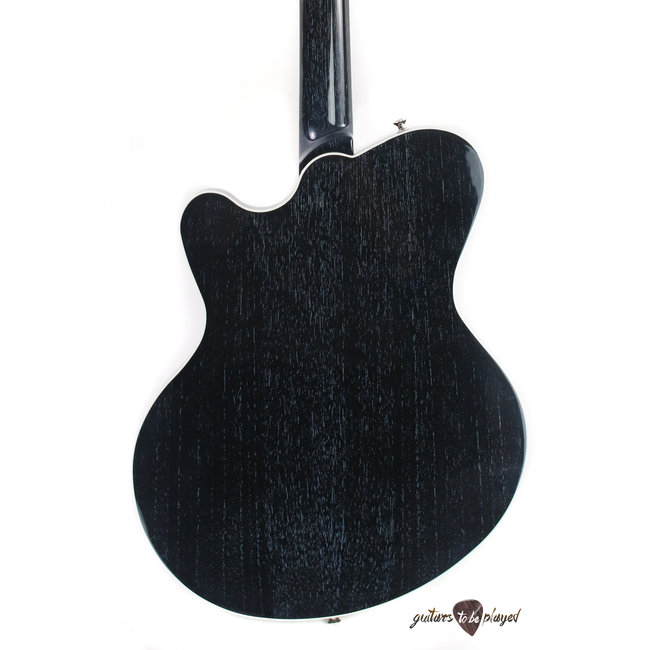 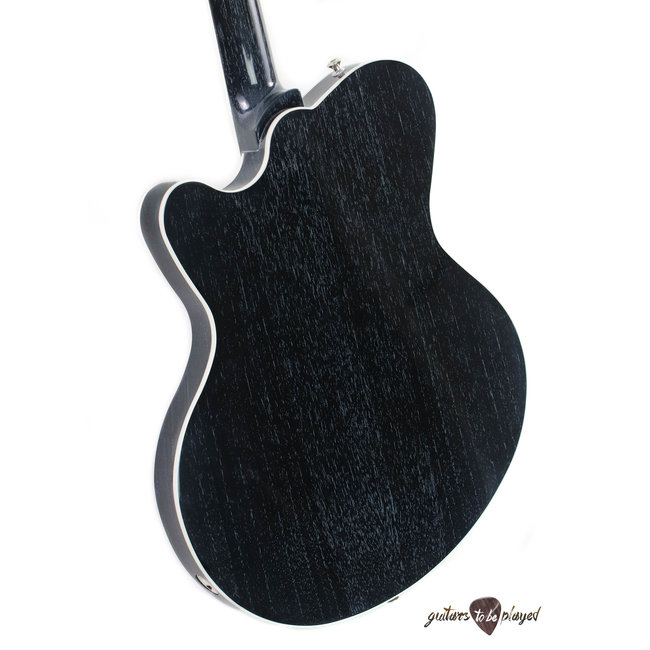 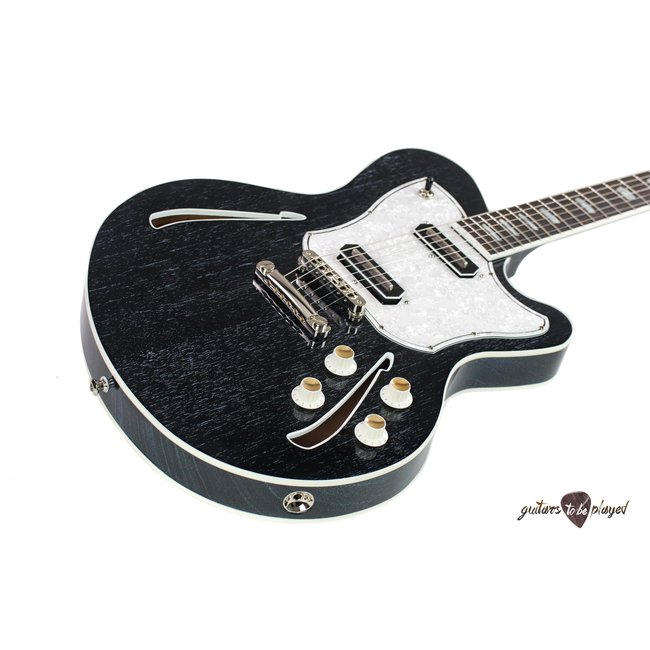 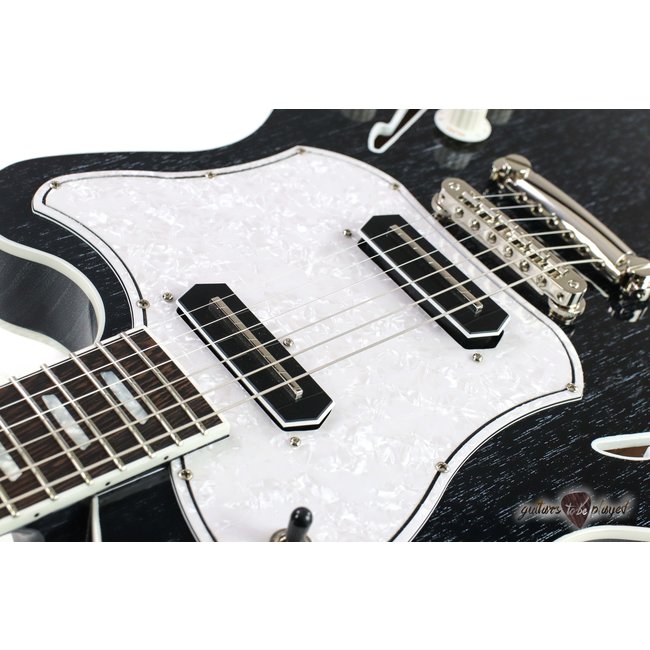 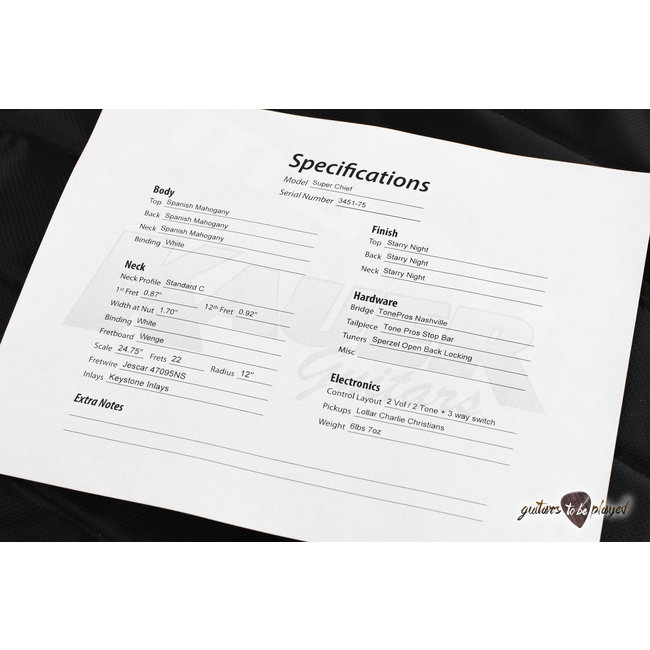 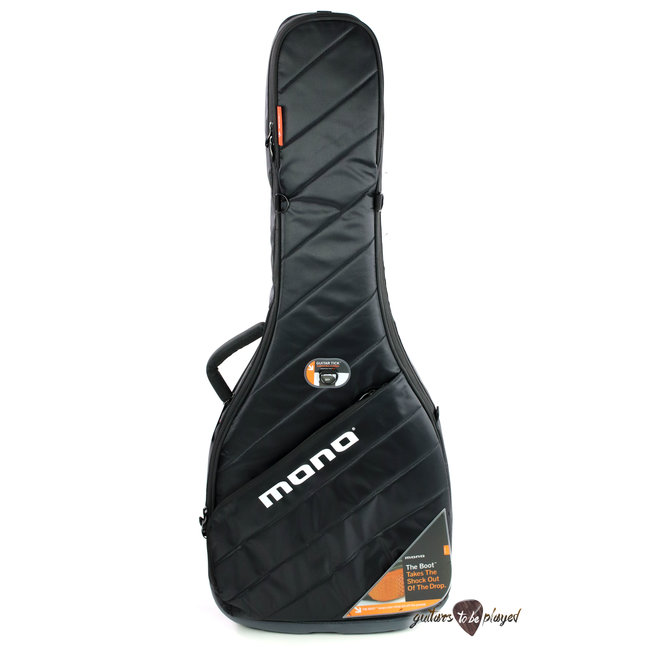 Brand New with Warranty. We are an authorized Kauer dealer!

Like what you see? Photos are of the exact instrument you will receive.

From the mouth of the builder: “This new semi hollow features our biggest ever 15.5" wide semi hollow body featuring our I-beam internal construction, Spanish Mahogany core and neck with Maple or Spanish Mahogany front and back plates. Huge, giant sound that is unrivaled in clarity and punch.” Despite its semi-hollow body, multiple members of the Guitars To Be Played team have commented on how uninhibited the upper fret access is on the Super Chief. The lower cutaway is fabulously deep and the heel is thoughtfully contoured. Even thumb-over-the-neck players will find ample room for their hand right up to the last fret. Also worth noting: Sperzel Locking tuners and Dunlop Straplock-ready buttons come standard!

What Do We Think?

The Kauer Super Chief is a very lively semi-hollow instrument by virtue of its solid mahogany top, back and sides. But drop in a pair of Lollar Charlie Christians and the doors are blown completely open. These pickups are built around a relatively weak magnet but wound with larger gauge wire for low resistance and mammoth tones. The output is similar to P-90s or PAF humbuckers, so you have plenty of opportunity to push an amp when you want to. But the guitar feels equally at home making clean lines stand out as it does crunching along to some good dirt on the bridge pickup.

Walking bass lines and chord comping sound phenomenal in the neck position. If only we could execute them better! But for the player who is skilled in that style of playing, the tools are all here. The neck tone knob plays VERY nicely with the neck pickup. It is easy to dial in a warm, archtop-inspired low end and maintain nice clarity on the upper strings for intricate chord voicings and commanding solo runs. This position will also deliver smoking blues lines without hesitation.

Lollar winds a bridge position Charlie Christian specially for Kauer and it makes for an incredible pairing. The middle position nails “The Bones” by Maren Morris. It has a pop-inspired feel with an open, vulnerable midrange. The tones here are tremendously full but exhibit a beautiful sparkle at the same time. This position also stays tight when you dig in with a heavier attack, popping out nicely on top of a mix. The bridge pickup by itself is shimmery, with a perfectly-controlled high end. The mids are pure and present, allowing you to execute everything from clean hybrid picking to legato lead lines.

If you are playing in a 3-piece band or even doing a solo guitar act, this guitar has no problem standing on its own. It is worth noting that it gets along very nicely with overdrive and exhibits a surprising resistance to feedback. All the while, the Charlie Christian pickups and semi-hollow body convey a tonal spectrum that is impressively vast. The lows go lower and the highs stay articulate right up to the point where they would border on being brash, and then roll off nicely. This guitar doesn’t pigeon hole itself into one genre or sound, but rather brings its own personality to each song on the setlist while sounding just “familiar” enough to sound the part all along. It is also a very nice weight on the shoulder, coming in at just under 6.5lb!

How Does It Play?

A breezy 4/64” at the 12th fret on the low E and even lower on the high E. We genuinely say this for every Kauer: We rarely set guitars up this low. We don’t like any fret zing whatsoever. But the PLEK’d necks on Doug Kauer’s guitars set up incredibly low without buzz. The rounded C neck profile feels great as well, bordering on a chunky C that supports the hand with ease without getting in the way. It feels the perfect match for the guitar.

The Mono Vertigo hybrid case is included and gives you ultimate flexibility along with superb protection.

0 stars based on 0 reviews

Add your review
No Sales Tax Outside of TN
Flexible Returns: 14-Day Trial Period
Worldwide Shipping on Most Items
Free Setup on all Guitars & Basses